This article was originally published in the Brocton Hall Handbook (c1961).

If you do not know the Midlands very well and think that Staffordshire is a county, the face of which has been completely spoiled by potteries and coal mines, then I recommend you to pay a visit to the Brocton Hall Club, entered from the Stafford - Cannock Road.

If there is a lovelier Club House or a prettier course in the whole of the Midlands then I have yet to find it.

The course and Club House offer attractions unrivaled in the district and visitors are welcomed, but before saying something about the Club House and course let me retract for a little to trace the earlier history of the Club. Golf was first played in the district in 1894, when there was a nine-hole course at Milford, not far from where the present course is now situated.

It was a sporting little course with a modest Club House, and the Club was in a prosperous condition when the First War came along, but as a result of huge military camps, the course was ruined.

When the war finished it was obvious a new course would have to be found and through the efforts of Mr. Rupert Evans, Mr. J. G. Gifford and others, negotiations were entered into for the taking over of Brocton Hall, for generations the home of the Chetwynd family.

These negotiations were carried through without a hitch and the next step was to engage Harry Vardon to make a preliminary survey of the ground. For this he was paid the sum of £6 6s 0d. The great man's report was satisfactory and the Cannock Chase Golf Club Estates Ltd. came into being. By 1923 the course had been laid out, the mansion house had been converted into a Club House and it was with enthusiasm that the members of the new Club watched Harry Vardon and Ted Ray drive the first balls from the tee.

The exhibition was followed by suitable alterations in the Club House which at that time was a three-storey building. Unfortunately, in 1939, the top storey was destroyed by fire, but with great ingenuity the builders have removed all traces of it and now the building is a perfectly proportioned two-storey residence.

The house dates back to George I, and his successor, the last British monarch to lead his troops on the battlefield, frequently stayed there. It is also said a ghost haunts the Club House but I certainly have never seen it. What I have seen, though, is a wonderful scheme of decoration which preserves much of the beauty and dignity of this great and stately home. The ceiling in the circular, French-windowed lounge, which was the original entrance hall, is as fine an example of ceiling decor as can be found anywhere in England. But if the interior of the house will provide the antiquarian with much pleasure, those whose thoughts are more intent on the good sporting golf in the most perfect setting will find great pleasure.

It is not a flat course, nor indeed is it hilly. The term pleasantly undulating applies perfectly. Close by the Club House there is a picturesque lake complete with swans. There I've seen a swan nesting, all oblivious of the human beings passing close by, although it always seems to keep a wary eye open just in case a stranger should come too near.

There are numerous beautiful trees of many kinds. Altogether it is most impressive and with the course always in the most splendid order, a visit to Brocton Hall is one that is not readily forgotten. Obviously this land is part of what was the great forest of Cannock Chase, used by hunters of centuries ago, and if one is energetic enough to walk a little way from the course to the high ridge close by, there is to be had a splendid view as far west as Wales and as far east as the Derbyshire peaks. But from the highest part of the course there is a pleasant enough view of the wooded, pastoral part of Staffordshire which many people are not familiar with.

The entrances to a number of greens have recently been tightened up by the extension of existing bunkers or by the introduction of new, well-sited bunkers in suitable places.

The first hole, one of 327 yards, is an attractive one with a wood on the right hand side. Anyone addicted to what we call a quick hook will be in trouble here but really if no wild hitting is indulged in, the green, despite its guardian bunkers, will not be unassailable.

The second hole, nearly a hundred yards longer, is much stiffer and regulation fours are not so very numerous. The tee-shot is down an avenue of trees, and the "tiger" is then asked to carry a wide dip to reach the plateau green. Many will wisely decide there is little hope in "having a go" with the second shot contenting themselves with being on in three. Even at that, the bunker on the left just short of the green, is a definite menace.

The third, 123 yards, is a beautiful little hole to a well-sited green which has been built into the sloping ground. The ground falls away on the right and there are quite a number of bunkers around and about. Everyone may not agree with me, but personally I like the very short holes, they're always the greatest fun to play.

This is followed by a fine two-shot hole of 302 yards. Its length is such that all but the "rabbit" should get on in two. This is the most picturesque and unusual hole played between two banks of trees, and there is not much room to come and go in if the green is to be reached in the desired two. I fancy this lovely hole will have caused some heart-burnings to more than a few golfers, but it is a splendid hole just the same.

The fifth and sixth holes are longer affairs. The former is 412 yards and the sixth a five bogey hole of 454 yards.

Not for the first time, the lie of the ground is favourable to the tee-shot at the fifth, but as at the previous hole, the second is played to a green at the top of a rise. Because the length of the hole demands a long second, the great danger for many will be to try too much and deviate from the line. If that happens, the two bunkers guarding the green might well claim their prey.

The sixth is one of the longest holes on the course. The drive is across a valley to slightly rising ground and there is a wide fairway, so the second can be hit hard. Around the green are several bunkers including a particularly intimidating one on the right. This is a good old-fashioned type of hole of the kind I like.

The seventh is a drive and a pitch hole of 275 yards. If reasonable care is exercised there is no reason why the plateau green should not be reached in two without a great deal of effort, although it must be said, greens of this type set into a slope and heavily bunkered often prove distinctly testing to many.

Another drive and pitch hole follows - one of 302 yards. Best line to take at this hole is the right hand side of the fairway as this opens up the hole. If the drive is too far to the left it will be found that with the green running away to the right as it does, getting the ball on and making it stay put is not at all easy. No! It must be the right hand side!

Now we come to the piece de resistance of the round. This is a long short hole of 183 yards which has very few equals. The long narrow green is sited alongside the lake which is by the Club House. The lake adds beauty to the hole, but alas! I fear it traps many golf balls. I might as well say, however, the lake is not the only hazard, for there is a ditch on the other side, and, yes, I'll go on, there is also a nasty bunker on the right. It all sounds very cruel but things always look blacker in cold print. Anyway I am most sincere when I say this hole is a pure delight even with its hazards and the fact that members can sit on a deckchair on the Club House lawn and gloat!

Now we go away from the Club House and play the slightly uphill 290 yards tenth, which to my way of thinking is another excellent hole. The green, on the crest of the hill is well sited, well bunkered and difficult to hit with the second shot even, although that should be little more than a flick.

The next hole, one of 427 yards, is of sterner stuff, a testing bogey four, and it is obvious from its length that only two long and straight wooden shots will suffice, unless one is certain of taking only one putt, and who can be certain about that, even on greens like those at Brocton Hall?

There is a little respite when you step off the green, for although the next is forty yards longer it is now a bogey five. The tee-shot is of paramount importance here and should be directed well to the right for there is out-of-bounds trouble on the left. There is also a stream at this hole to worry the scratch man who is trying to get the green in two. I think I will leave this very fine hole by saving it is one of the best holes on the course.

The thirteenth is a genuine two-shotter of 343 yards and again getting the drive away is of great importance as there is a rather horrible grassy pit just in front of the tee. This hole has also a very carefully sited green with falling ground on the right and beyond. Altogether another one to test the player struggling for figures.

The fourteenth although now slightly dog-legged is perhaps a little less wearing on the nerves because it is 448yds and is rated as a five. As the ground is somewhat in our favour, that figure should be accomplished if care is taken in playing the shot to the green. I certainly rate it a much easier five than the twelfth.

I like the 362-yard fifteenth because of the second shot which has to be played over a stream to a rising slope on which is the well-bunkered green. As the second shot will be quite longish for many at least, this approach is liable to be troublesome.

After this pleasant hole we tackle the sixteenth which like all good sixteenth holes, can be a card wrecker. The drive is over a stream, and having seen that one safely delivered, when we arrive at the ball, we discover there is another stream to be crossed. I might also say there is not a lot of room at this hole, and those who get away with a four will be delighted, and those who register a five will not be displeased.

The seventeenth is a lovely one-shotter in the most beautiful surroundings. The green is very tight, and no liberties can be taken, even though we are close by the Club House, the bar of which is beckoning.

And so to the last hole played back to the Club House. Again it is one of the drive-and-pitch variety and very pretty and interesting it is too - a splendid and not too exacting finish to a good round of golf on a course which is picturesque, in beautiful order and always interesting.

Tom Scott was a widely respected golf writer and author of many books.

Back to the Heritage Page 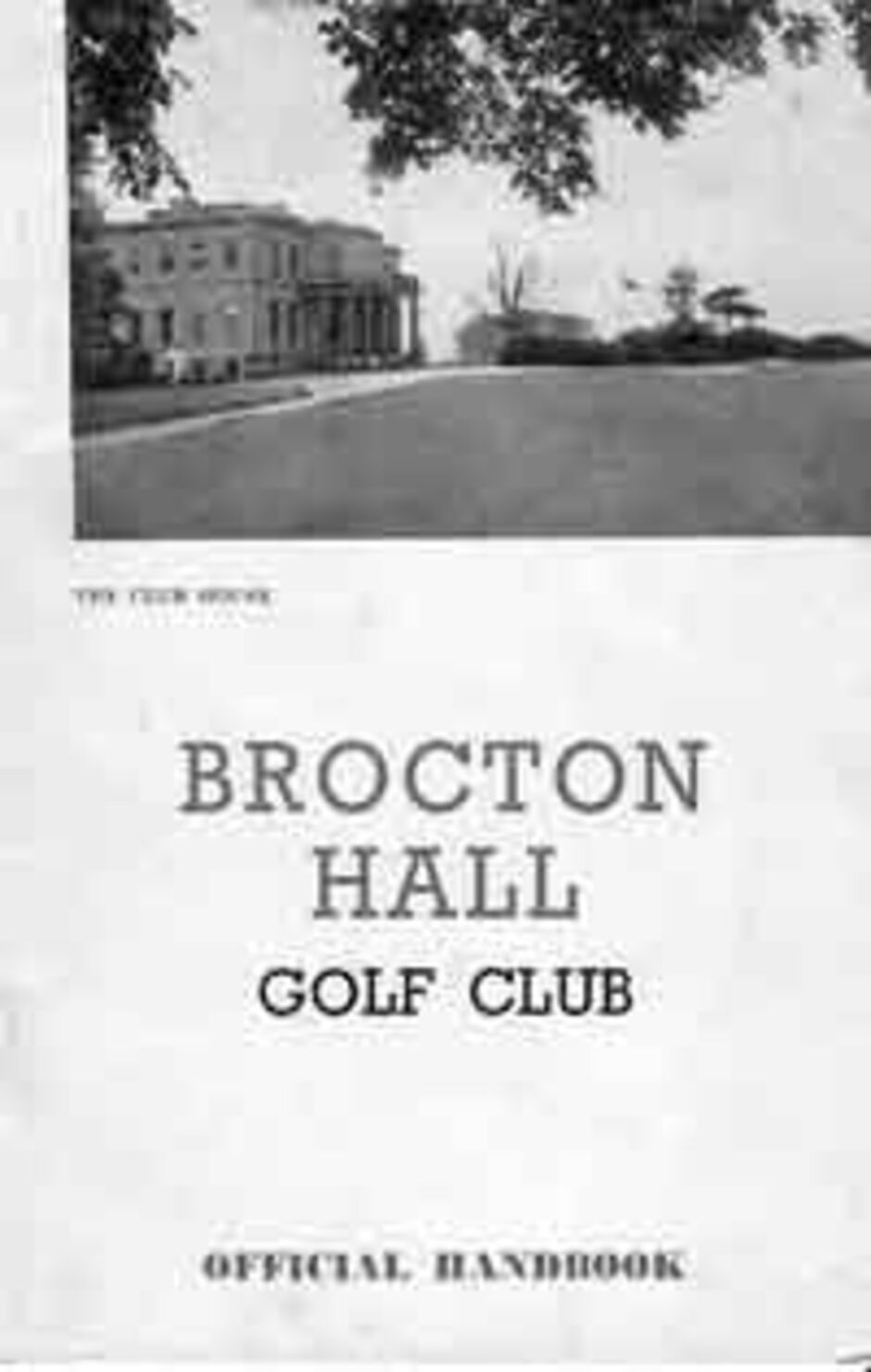