In 1994 Brocton Hall Golf Club celebrated its centenary with the publication of a history of the club, ' 100 years of Golf '.

This section could not have been written without the assistance of Keith Davey who co-authored, with Norman Griffiths, the book to celebrate the Centenary of the foundation of the Cannock Chase Club in 1894.

The Club history goes back over a hundred years to the creation of the Staffordshire Golf Club in the 1890s when Mr Conway Morgan met with the Stafford Common Householders and obtained permission to play on Stafford Common. The course was laid out by Mr Morris a professional from Hoylake, and play started in February 1891. However the location had a number of limitations as the fairways could not be cut in the summer when cattle grazed the Common.

An alternative was sought by some of the members and in 1894 Dr George Reid (the Medical Officer of Health for Stafford) negotiated the rental of an a corner of Cannock Chase at Milford from the Third Earl of Lichfield for 1 shilling (5p!) per annum. The course was quickly laid out at an estimated cost of £70 and play started in July 1894. A small wooden pavilion was used as Club House next to the Barley Mow Inn on Milford Common.

By 1897 the Club on Stafford Common had folded with most of the members transferring to the new 'Cannock Chase' Golf Club and in 1898 a new purpose built thatched club house was completed near Broc Hill. The opening was celebrated with an 36 hole match between two Open Champions 'J H Taylor' (Professional) beating 'Mr John Ball' (Amateur) 6 & 5.The Club prospered in the years up to the First World War and by 1911 had a membership of 240 (including 80 ladies). Matches were played against teams from all over the Midlands.

During the First World War the Club continued to function with members being joined by officers from regiments stationed at the numerous camps on the Chase. The course was affected by the war with the short lived Cannock Chase railway line running through the 6th Hole. The club was starting to recover when in March 1922 the Club House was destroyed when the thatch caught fire (probably ignited by a spark from the chimney). The Barley Mow was used as temporary Club House while the situation was reviewed.

The Move to Brocton

After the fire the club had to decide what to do, by 1919 membership had dropped to 120 (46 ladies) and the Chase was now being more extensively used by the public.

In 1920 Brocton Hall and grounds, under a mile away from the course, had been put on the market but the Hall had failed to make the reserve of £5,900.

The Club commissioned Harry Vardon (6 times Open Champion and one time American Open champion) to examine the Brocton Hall grounds. In May 1922 he submitted his report declaring that it was ".. eminently suitable for an 18 hole Golf Course" and that "The cost .. should not exceed £150 per hole".

The decision was made, the finance promised and Brocton Hall estate was purchased in September 1922 for £5,550. In January 1923 'The Cannock Chase Golf Club' was reconstituted as 'The Brocton Hall Golf Club'.

The Club's official opening on 12th July 1923 by the Fourth Earl of Lichfield was followed by an exhibition match between the course architect Harry Vardon and Ted Ray (Open Champion in 1912) which ended in a draw.

The club soon regained its position in Midlands golf and was soon playing matches against local opposition. For many years the Open Mixed Foursomes event attracted some of the leading amateur players in the country.

Sir Walter Chetwynd, owner of Ingestre Hall, purchased the Brocton Estate (3 miles from Ingestre) for his nephew, another Walter Chetwynd who moved into Brocton Manor with his wife Mary, the daughter of William Sneyd of Keele.

Their son William demolished the Manor House and built Brocton Hall in about 1760. The Hall stayed in the family eventually being owned by Mrs Mary Chetwynd, widow of Charles Chetwynd (d 1895). It was Mary Chetwynd who sold it to the Club in 1923.

When the Hall was acquired it was a three storey building that seen better days, there was no electricity and no heating. It was quickly converted into a comfortable club house with accommodation on the top two floors, the first floor for the resident secretary and lady visitors.

The top floor was converted into a 'dormy' house for visiting groups. Up to thirty visitors could be catered for and it provided valuable income for the club up to the start of the Second World War.

Rule 44  - Nothing will be served in the Bedrooms excepting Tea, Coffee, Cocoa, and Chocolate and Bread and Butter or Toast

In October 1939 plumbers repairing the lead guttering accidentally started a fire that destroyed the top storey and damaged other areas. It was impracticable to rebuild in wartime and the building was repaired to leave the two storey building we see today.

In 1993 an extension was built to provide a large dining/function room whilst maintaining the original design featuresof the original building.

In 2007 a major project was undertaken to refurbish the mens' locker rooms and improve other features of the basement area in order to meet current Health and Safety requirements.

This involved remodelling the south west facade of the building to create new access corridors and stairs.

Chris Cooper RIBA, the architect, created a series of articles titled "The Basement Chronicles" detailing some of the interesting features and problems that were unearthed as building work progressed.

During the war the club functioned at a reduced level with the green staff reduced to two and the course home to flocks of sheep. Some golf was possible on a somewhat neglected course.

Rationing and shortages restricted the club after the war but golf resumed as the staff returned. The course matured and in a Club Handbook of the early 1960s Tom Scott the renowned golf journalist described it as ..a course which is picturesque, in beautiful order and always interesting.

Read the article by Tom Scott

The course itself remained very much as Harry Vardon had designed it. The greens were renewed in the 1980s to correct over-fertilisation and over-watering. The water features were extended in 1993 when the 18th Century Mill Pool was restored beside the 17th fairway. The course has been enhanced by the planting of new trees and the replacement of old ones (especially elms).

In 1994 The club celebrated it's centenary with the publication of a history of the club and a number of special events including golf on the remnants of the original course at Milford. 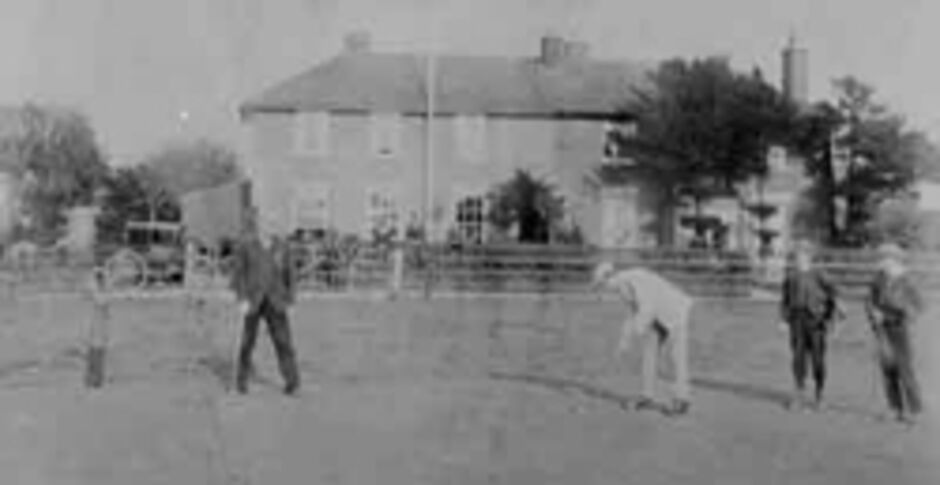 Putting out on Stafford Common circa 1895 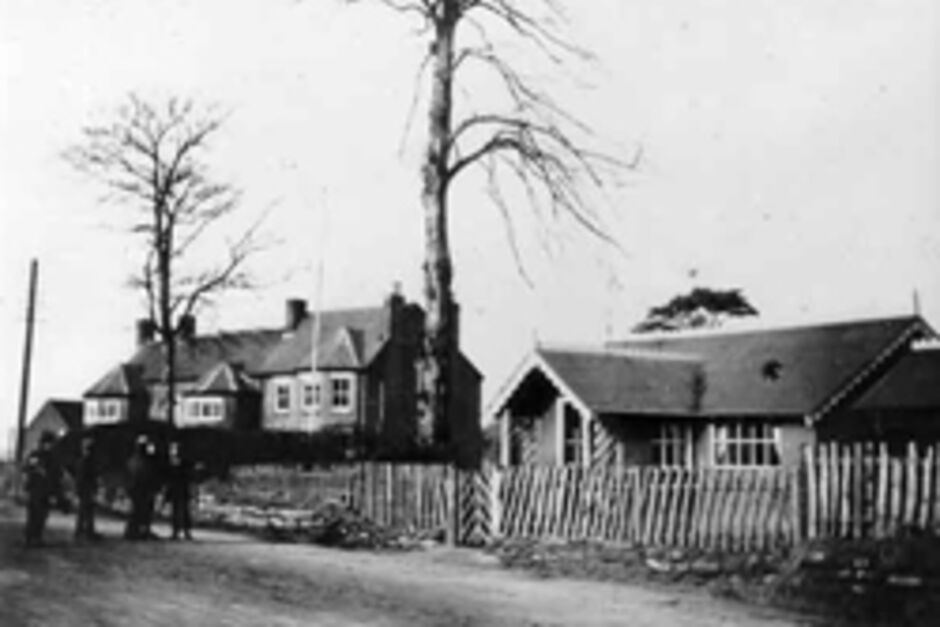 The original clubhouse next to the Barley Mow 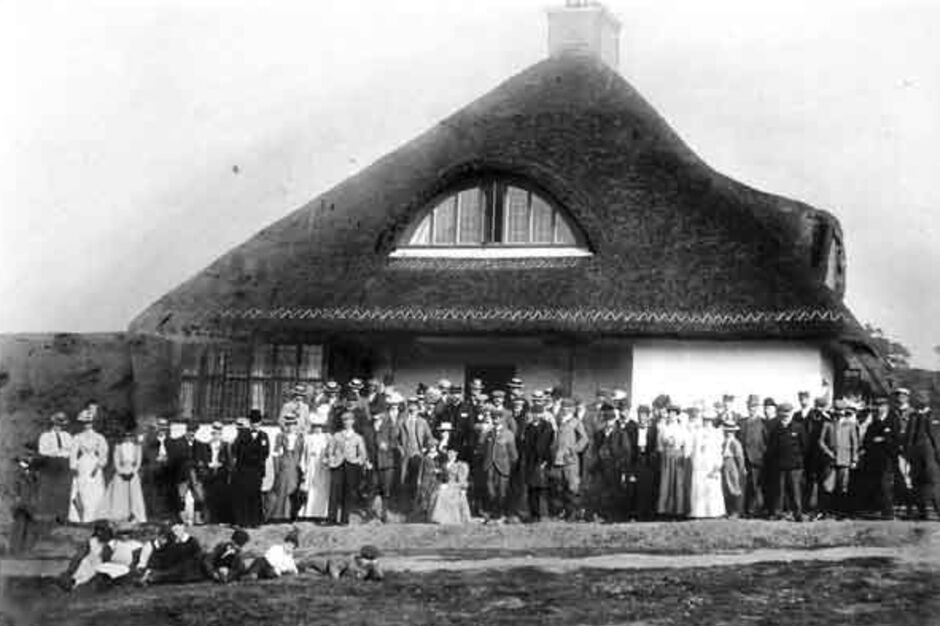 An early photo of Golf House 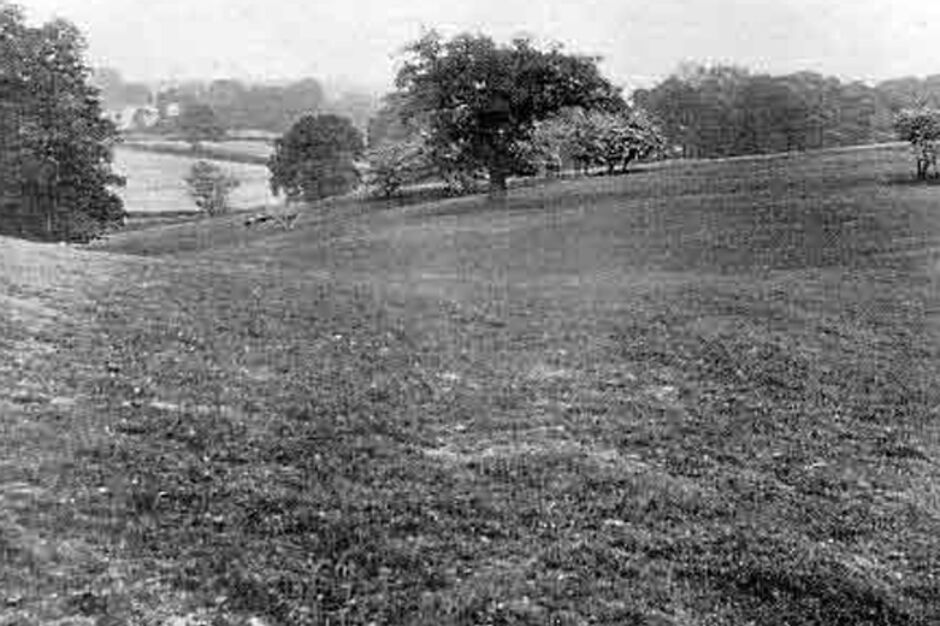 Before work started on the course 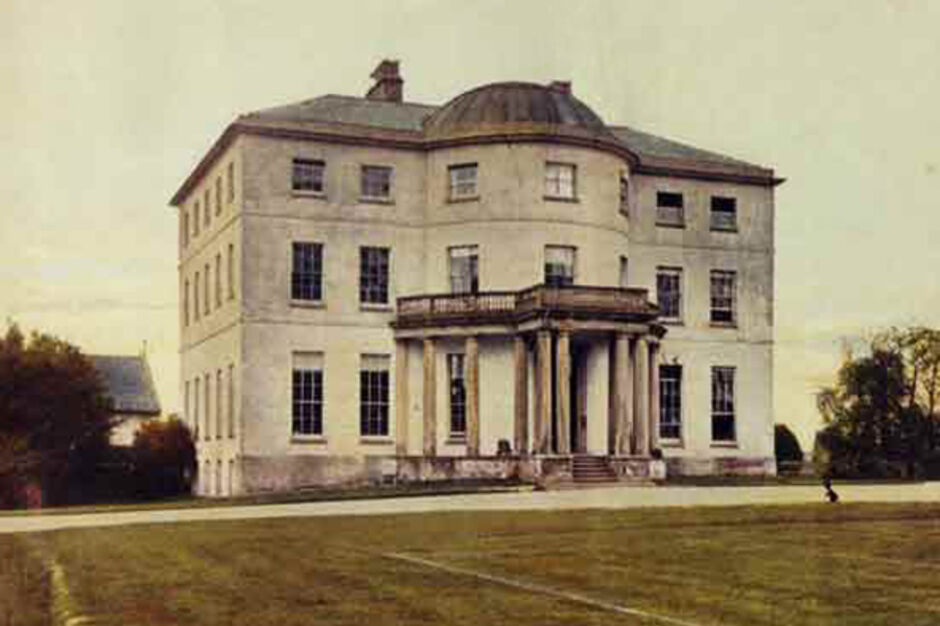 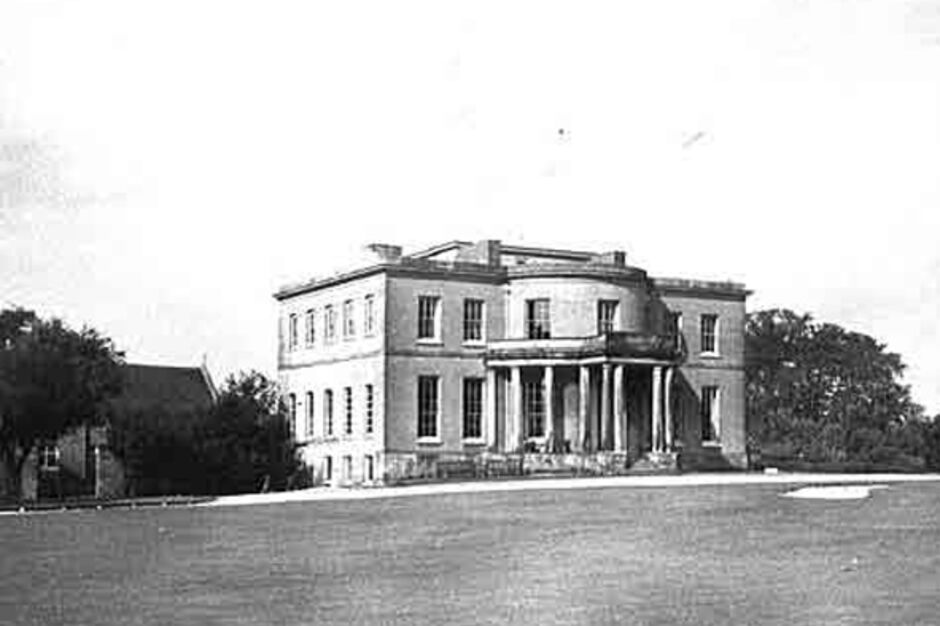 Brocton Hall after the fire 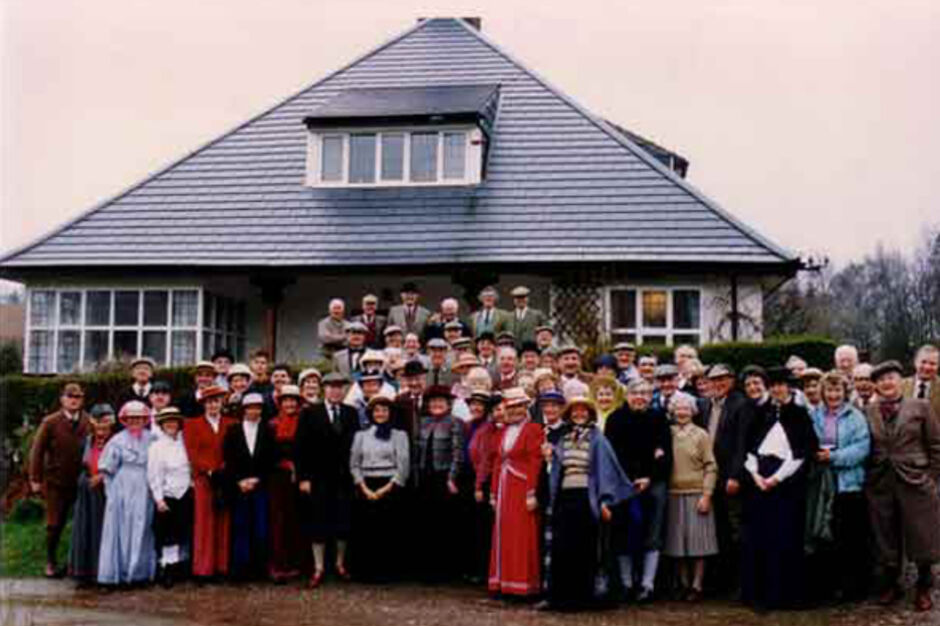